Café Flore through the times 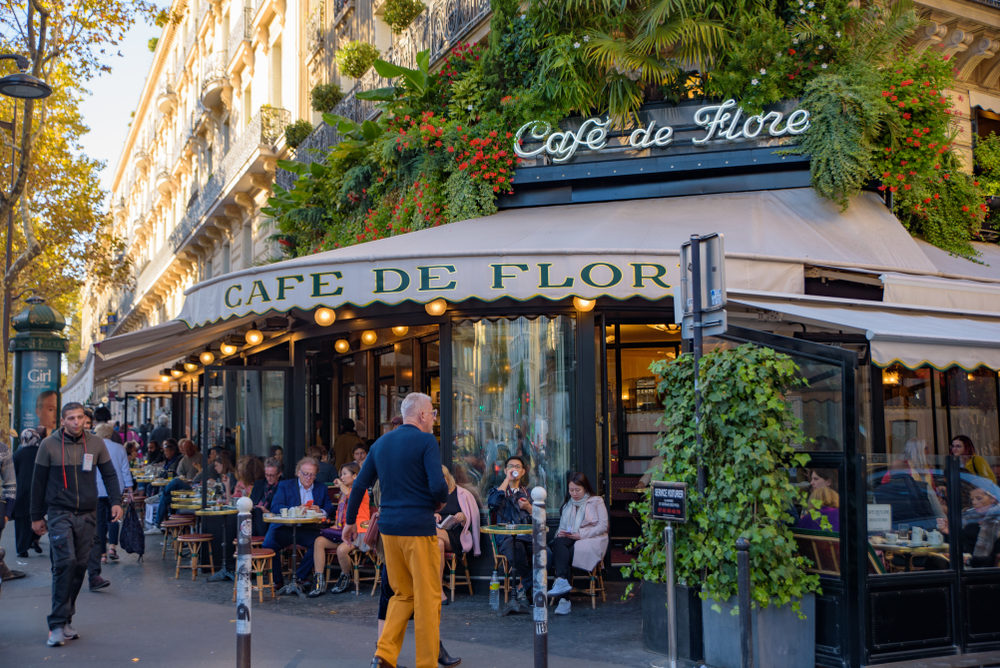 The famous Parisian café-restaurant in the Saint-Germain-des-Prés district, in the 6th arrondissement, owes its name to the sculpture of the goddess of flowers and spring, located on the other side of the boulevard. Bit by bite, le café de Flore has become a Parisian institution.

At the dawn of the end of the First World War, around 1913, French poet and writer, Guillaume Apollinaire, took the place over and invited his friends: André Breton, Paul Réverdy, Louis Aragon and Paul Éluard.

In 1917, discussions between these leading figures lead to the invention of the Dadaist intellectual, literary and artistic movement, Dadaism which is characterized by questioning any traditional conception of art, later leading to “surrealism «.

Café Flore under the German occupation

In the 1930s, Café de Flore became the favourite place of literary Paris and also a freedom and tranquillity retreat despite the German occupation.

In 1939, Paul Boubal bought the café and installed a large charcoal stove that heated the ground floor and the first floor.

Simone de Beauvoir gradually left Montparnasse venues, such as the Dome or the Closerie des Lilas, for the Café de Flore. In 1941 Jean Paul Sartre joined her, and invented the “existentialist” philosophy. He even wrote, “We were at home at Flora’s”.

The Sartre-Beauvoir couple became one of the “pillars” of the café Flore, just like Charles Maurras, Boris Vian, Jacques Prévert, or even in the 1950s, Americans, such as Ernest Hemingway, Jean Seberg or Gary Cooper.

In 1994, around one of the coffee tables, the Prix de Flore was created aimed at rewarding an author with promising talent. Originality, modernity and youth are the key watchwords of the Jury, chaired by Frédéric Beigebeder. The prize is awarded an evening in November at the Café de Flore.

Just a few metro stations from Aloha, come and enjoy the atmosphere of the Café de Flore, along with its iconic Flore chocolate or tarte tatin.